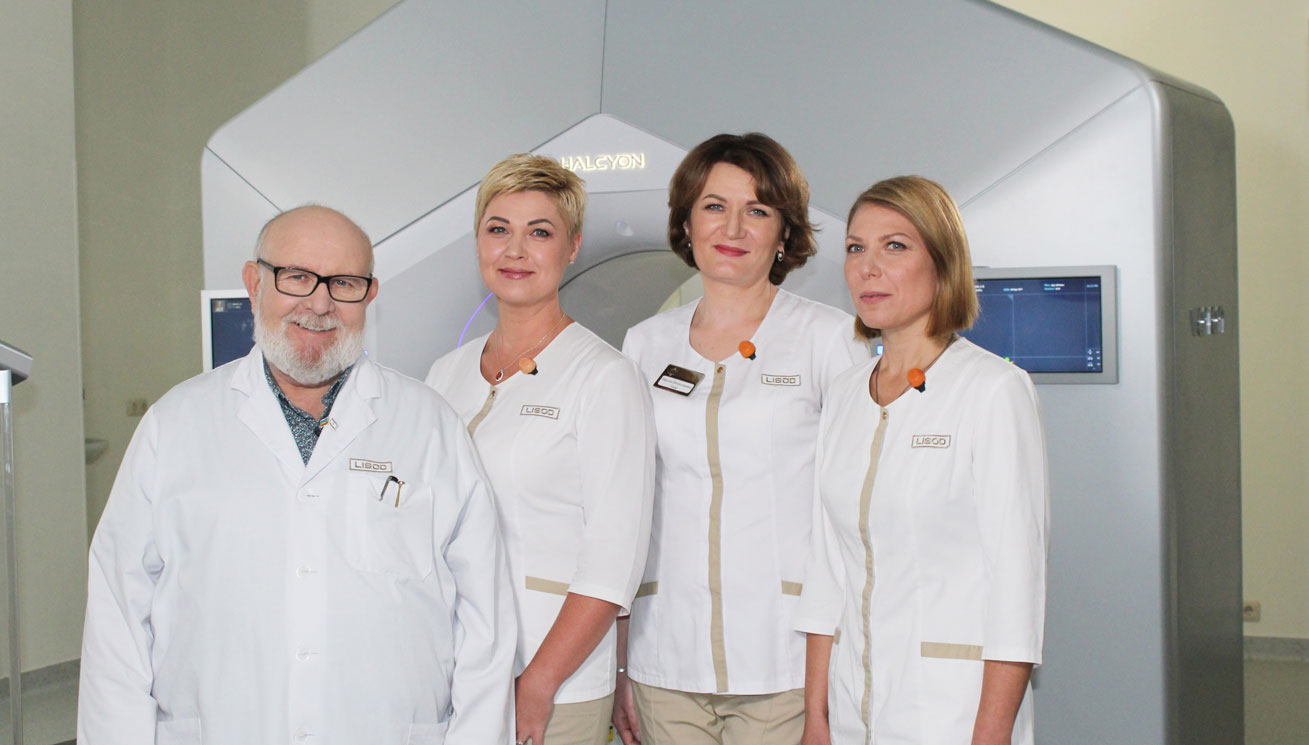 Radiation therapy is a method of treatment of many neoplastic and some non-neoplastic diseases with ionizing radiation. Malignant cells’ DNA is injured affected by radiation therapy which causes a lot of mutations and leads to their death. Normal cells of the body do not undergo these changes because they are more resistant to radiation.

Radiation in breast cancer treatment is usually prescribed after surgery (adjuvant) to prevent a relapse of the disease.

Radiation therapy following breast-conserving surgeries is now the standard of breast cancer treatment and the chance of relapse has significantly decreased thanks to this approach. After the whole breast is removed (mastectomy) radiation therapy is only prescribed in cases of large tumors, if the tumor has been partially removed or when more than three lymphatic nodes are involved.

The duration and the dose of the radiation is calculated individually for each clinical case. On average, radiation therapy lasts around six-seven weeks and is prescribed in the dose of 50 Gy over the period of 25 sessions for the whole breast and (when necessary) for the lymphatic drainage pathways + Boost (additional irradiation of the tumor bed) in the dose of 16 Gy in 8 fractions. Overall, the patient receives 66 Gy of radiation over 33 sessions (visits) in the five days per week format.

At LISOD radiation therapy is performed with the modern VARIAN linear accelerators that provide doctors with extremely clear and detailed three-dimensional images and allow to adjust the exposure dose during the treatment.

On the whole it is an opportunity to deliver high doses of radiation directly in the breast and the tumor bed safely. Thanks to new techniques of 3D-conformal radiation therapy (IMRT, VMAT etc.) treatment has become even more effective. This also allowed to reduce the number of required radiation sessions, the duration of treatment and the likelihood of side effects – which is an additional benefit.

Another significant advantage for the LISOD patients is that radiation therapy is prescribed and performed by a team of professional, among them are radiation therapists, medical physicists, technologists, nurses with extensive experience. The Department of Radiation therapy is headed by an Israeli clinical oncologist, radiotherapist, world-renown doctor with more than 40 years of practice Zvi Bernstein. This powerful team guarantees efficacy and quality.

In such cases the whole breast irradiation lasts around 3 weeks (15 sessions up to 40 Gy).

Depending on the tumor’s biology, doctors at the multidisciplinary breast concilium can take a decision to increase the dose in the area of removed neoplasm (so-called Boost for 5 fractions of 2 Gy). In this case the course of radiation therapy lasts 4 weeks.

The accelerated partial breast irradiation technique has shown to be an effective and safe radiation therapy method. The idea is to irradiate a limited amount of breast tissue which includes the removed tumor bed +2-2.5 cm.

The benefits of this technique are:

In some cases when a high dose of radiation has to be applied to the tumor bed, but it cannot be identified during simulation (no radiopaque marks in the area of a removed neoplasm), or it is very large, and also when regional lymph nodes are irradiated, a decision may be taken to perform whole-breast radiation therapy with a dose of 50.4 Gy over 28 sessions (5.5 weeks).

Some oncological clinics perform intraoperative irradiation that complements postoperative external beam radiation therapy and shortens its duration but does not replace it.

Brachytherapy (contact irradiation) is an alternative to external beam Boost-irradiation of the breast. In this case a radioactive substance is delivered directly in the area of the removed tumor via a little plastic catheter under short general anesthesia.